This piece is part of the #52essays2017 challenge where I will share one essay a week in 2017. To learn more about this challenge or to participate, check out writer Vanessa Martir’s website and post about it. 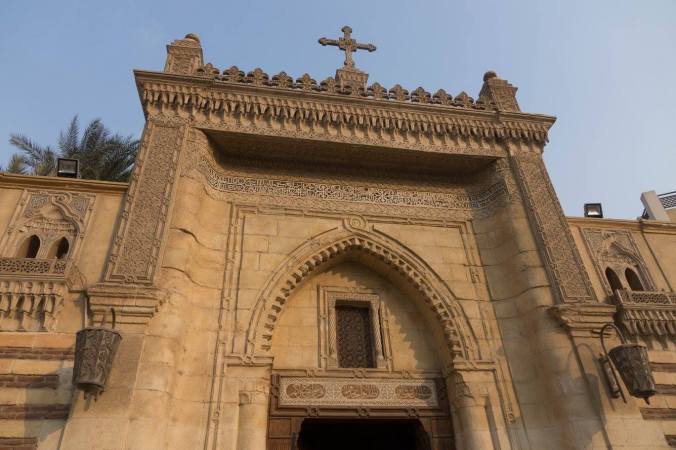 “What do you mean? You seriously don’t know the name of this church?”

I didn’t know the name the of the church. It was one of the thousand things I did not know about Egypt. In fact, everywhere I turned there was something else I didn’t know about the Middle East. Something I didn’t understand about how to conduct myself in public as a woman in an Islamic country. Someone else I was misunderstanding. But, hopefully not offending.  There was an infinite quantity of things I was ignorant about. I had gone from being a reader and writer and a person who educates others to someone who made facial expressions and crossed my fingers hoping to convey a feeling. Unfamiliar had introduced me to helplessness; and it was not the destination I had been planning to visit. It was our twenty-sixth day in the country.

The first day wasn’t really a day because it was actually thirty-nine hours of traveling from home to NYC to Dubai and then on to Cairo, that equated to two full calendar days and at least one full night of net sleep loss. During the flights, I felt like I was handling it all. But, now we were having a fight because I had acted like I knew what I was doing – getting pretty confident here on day twenty-six! Yes, maybe today was was easier than the first day when I had not yet begun to shed the skin that came from America, when I was still firmly rooted in the body that had flown on Emirates Air and chose “Asian-vegetarian” from the airplane food menu. On the first day, I was still my home self, which was potentially going to be a problem seeing how we were so far from home. The person I knew to be Me didn’t fit in this place very well. I had hoped that when I arrived I would be me, but maybe an upgraded version! of myself. One that was brave and adventurous. But the Me that showed up on day one (and two and three) acutely felt the intense fright of a foreigner. The travel magazine writers encourage this need to desperately “get off the beaten path”, but caution to those that try. Superficial blurbs about beach resorts and tour buses only seem banal when you are too comfortable to notice that the people in the country you are reading about don’t buy travel magazines. Later, when I’m standing in a slum, I note that there are no photographers taking pictures here. Couples aren’t feeling romantically inclined. There are no overeager millennials posting to social media. No postcards wishing folks at home were here – or exclaiming, “no, you really have to smell it to believe it!”  The gloss is oily residue on a puddle.

But I was going to be different. I was going to be one who showed bravery in heart despite an anxious mind. I was equipped. I had pared my things down to the minimum and had only the necessities. My camping gear rolled and bumped awkwardly around the spacious interior of my too-large duffel bag. But, my mind was full to the brim and cinched shut. It was like an overstuffed and duct-taped sofa filled to bursting with information I had crammed in prior to the trip. I was committed to researching my way to a successful trip. Knowledge is power, right? Information comforted me. It was my professional superpower and my personal safety blanket. Egypt could be studied, and that was what I did to make myself comfortable with the uncertain. New vocabulary bolstered me. History propped up my sandaled feet. Maps were throw pillows. Blog entries encouraged a leisurely sprawl. Poetry was a snack bowl and fiction was a big-screen TV with cable.  Surely…surely! I must understand something from all this text I ingested during my reading. I read! Therefore I must, consequently, have learned! It’s stupidity that is the pitfall. I would know things when I arrived. And knowing would shelter me, guard me, and keep me safe.

But on the twenty-sixth day, after touring four mosques and two souqs, we had arrived at the last place on the tourist checklist for the day. There were three of us, and I was the one (with all my knowledge!) who had talked them into coming despite the fact the Muslim cab driver was outraged that we wanted to go to the old Christian part of town. Or maybe he was outraged that he’s have to be stuck in Cairo traffic, probably driving away from his own home in the process. Either way, the fare ensured that he would drive us where we wanted to go during the hours we agreed upon. Which sort of happened, despite a detour to a papyrus museum and perfume factory  where he winked at the owners and sat drinking tea and texting while we tried desperately to extricate ourselves.

He got his kickback and we were going to this church. The church, one of several in the old quarter, was one of the ones I recognized from pictures during my research and planning. It looked familiar, but I didn’t know what the church was called or which one it was, exactly. My friend was getting frustrated. She wanted to know what she was looking at so she could look up why it was important.Then, if she agreed it was important, and if she decided it it merited a photograph she would consider the hassle getting her to be worth her while. She walked off to get a better view. Egyptian drivers seemed to swarm around the traffic circle. Frenetic energy sizzled in the heat as the city throbbed around us. One could get lost in the variety of transportation options all moving at different, yet equally intimidating speeds. Motorcycles.Buses. Carts pulled by horses. Rows of packed minibuses with men smoking in the front seats and women looking at cell phones in the back.

The noise wasn’t helping my concentration. Who cares what the name of the church is? If I hadn’t told people I had read so much about this very church they would never had expected me to know the name. Searching my memory, I tried to come up with a likely guess of what the name might be from the surroundings.  Was that English street sign a clue? Could I catch it if I strained to overhear a passerby, hone in on a familiar sound in the midst of a melodic stream of Arabic? But really, I didn’t know and I rapidly was starting not to care. I wanted to go in and cool off in the dark and candlelit interior. Get off this street. Moving sideways out the way of the pedestrians who did know where they were going was becoming tiresome. Avoiding rubbish in piles, while digging through the guidebook wasn’t helping the situation. Speculating whether the pollution ever cleared in this city also wasn’t helping. There was simply too much commotion to hear my own thoughts, even if the information was buried deep in my subconscious. Vulnerability creeped in as I repeated to the group, “no, I don’t know”.

And at that moment I felt something.

It was a rush of movement near me.

It was a “no”, but not about the church name, not anymore.

It was a silent scream of shock.

It was the color red.

It was man. A boy? A blur running off into the traffic.

He didn’t even look behind to see the face of the woman he groped between the legs.

How did I know then that he was smiling? My friend asked me, “did I?…did he?…did that just happen?”

I noticed a monk in a window of the church. He was wearing all black.

She asked again. I nodded.

It happened so fast.

The male in the group puffed up. “That bastard! Why didn’t you say anything?!” Swearing. He ran into the traffic.

None of us thought he would catch the man.

All of us knew he had to run after the guy, anyway.

What was I saying about vulnerability?

Suddenly, instead of actually crying, my mind chatters into action. I can see words in my mind’s eye. I read about this! This, I do know!  I know something about this.  I read about it!

My brain offers up several articles and at least two full books. My memory is crystal clear. Regardless of my education level, prevalence of  feminism in America, what part of town we were in, time of day; it is common for this to happen. It is even in the guidebook under “Safety”.

Foreign women are often catcalled and rubbed up against; harassed and sexually assaulted. This is a fact. I was having trouble accepting the research that my mind was cheerfully and helpfully trying to retrieve. My friends’ faces were dark. I couldn’t turn off my confident competent mind.  But, my heart could not listen. My heart didn’t want to be informed. It didn’t want to try to act brave anymore. I wanted to go home.

I read twenty- three books about Egypt before I left on the trip. None of them prepared me for a random man running through the traffic circle and picking me as his target for a little ‘fun’. The incident happened twenty-six days into a trip that had transformed me through trials and taught me to trust. It was slowly making me the Me I was hoping be. This country was capable of this. This country was giving me this gift. This country was also scary. It was okay to say it. It didn’t mean I was admitting anything. It wasn’t anything anyone didn’t already know.  It wasn’t in a book and if it had I wouldn’t have understood. Twenty-three books and a whole lot of words. All those words helped me to see and feel Egypt before I arrived. They prepared me to empathize with Egyptians. But, they did not make me safe.

We left without going in the church. People were angry. At me, for not speaking up faster. At the man’s disgusting behavior. At a country that was suffering and full of scammers. AT unfairness everywhere.

What could help? Knowing why. An answer. None of us wanted to say what we all knew. There is no answer to why unpleasant things happen. There is no name that marks the cause and there is no fact that erases the effect. There is information. There is feeling. And there is an infinite world of unsayable and unknowable in between the two.

Day twenty-seven the sun rose over and we dragged our bags onto the truck. We slowly made our way out of the clogged and ancient streets of this magical and cruel place.  As we passed crumbling buildings and begging children, I tried turn off my mind and see with my heart, looking beyond. Inside the truck, we bounced along and the engine whined. For a moment, I could hear my friend’s voice above the others before it was drowned out with the sounds of the traffic.  We passed a traffic circle, but rather than looking, I closed my eyes.

And then I opened my book and started to read a new chapter.